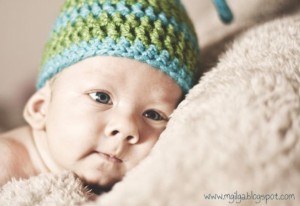 My name is Kubuś. I was born on 12 February 2013 in the Specialist Hospital No. 2 in Bytom. In the fourth day of my life I was taken to the Upper Silesian John Paul II Child Health Centre in Katowice for further diagnostics. When I was still in my mummy’s belly my parents learned about my defects. The doctors from Ruda Śląska carried out a special test.

After I was born, it took 20 days of tests before the doctors made the diagnosis. I was born with fibular hemimelia (the congenital absence of the fibula). My right leg is shorter than the left one. It is missing the fibula bone. The tibia bone is shorter and bent. My foot is also not as it should be. It is in the wrong position and has only 3 toes and no ankle.

I also have a problem with my left hand. It has 3 fingers, of which two are fused together. My forefinger is split with the thumb. As if that was not enough, the neurologist diagnosed increased asymmetrical muscle tone in the limbs. I require constant rehabilitation and once a week I undergo the NDT-Bobath method rehabilitation. 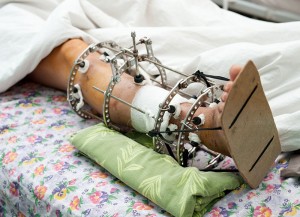 After numerous visits to various specialists in the field of orthopaedics we found doctor Shadi who wanted to treat my foot. On 29 September, I underwent my first surgery. The doctor straightened my tibia and positioned my foot at the right angle. I had my leg in a plaster cast for three months.

In April 2016, I will have further expensive and painful surgery involving the lengthening of my leg by a special Ilizarov apparatus. I will wear it for about 6-7 months and it will lengthen my leg by approx. 6 cm.

Unfortunately, I will have to undergo this treatment every 3 years until the end of the growth period, that is until I am about 17 years old. At present, my leg is about 10 cm shorter than the healthy one, which makes moving difficult. However, until then I will be learning to walk on a special brace made for me by the orthotician.

In August, we are going to Hamburg for consultations at the hand surgery clinic where the doctors will tell us how to improve my hand so that I could grab things, because at the moment I can’t.

I’ve got a long and painful treatment ahead of me, but I believe that one day I will be able to walk and run like other children.

I also believe that thanks to you, people with good hearts, I will raise enough funds for the surgeries and that in the future I will be able to stand on both my legs without anyone’s help.

You can help me in many ways. Detailed information can be found in section: How You Can Help?

Kubuś underwent his first surgery on 29 September 2014 in Poznań. The surgery was carried out by doctor Shadi. He had a reconstruction of the lateral malleolus, positioning of the foot and straightening of the tibia. The surgery cost PLN 9,000. There was a long queue for the surgery in the National Health Fund (NFZ) hospital, so we opted for private treatment, because the surgery had to be done between 12 and 24 months of age.

Kubuś will undergo further surgeries, if there are no complications, when he is 3 years old. He will have the Ilizarov apparatus attached to lengthen the tibia and correct the valgum knee. At the moment, the leg is 10 cm shorter and Kubuś cannot walk on both legs. He is learning to walk on a custom-made brace produced by an orthopaedic company. The lengthening of the leg will be carried out every 3 years until the end of the growth period, that is approx. 17 years of age. One Ilizarov apparatus costs PLN 20,000. Kubuś could have the surgery at the National Health Fund hospital not earlier than in 2020, therefore we are raising funds for our son’s treatment at a private facility.

Kubuś has a long-term treatment and life-long rehabilitation ahead of him, therefore we would like to ask for your help to raise funds for our son’s treatment. Thank you.

Gavril Ilizarov was the inventor of the Ilizarov apparatus. He began his education in medical school in Dagestan, and then he entered the Crimean Medical Institute. After the Nazi attack on the Soviet Union the institute was evacuated to Kazakhstan where Gavril completed his medical studies. After finishing the school he became a doctor in the Kurgan region in Siberia.

Although he was not a surgeon, but a regional doctor, he treated war injuries, which were numerous in this period. He specialised in bone deformities and disorders of bone union. Ilizarov invented the distraction osteogenesis.

How does it work?

Distraction osteogenesis is a surgical procedure used to lengthen the bone. This is done by cutting (fracturing) the bone without compromising the continuity of the periosteum, and then the two bone ends are gradually moved apart by means of a special frame. The pace of stretching depends on the individual course of treatment (up to 1 mm per day).

Tissue regeneration is used, which commonly occurs in the body during the formation of periosteum scar after fracture. A regenerate, as Ilizarov called the tissue forming at the stretch place, has the same structure as natural tissue.

Muscles, nerves and blood vessels stretch evenly with the bone and adjust to the new shape of the body.

For the proper conduct of the process several conditions need to be met, including suitable technique, osteotomy in the right place (bone cutting or fracture) and stable connection of bone fragments with the stabiliser, as well as a normal period of delay of distraction and an appropriate pace of the treatment.

The stabiliser was created in 1950 (introduced for use in 1951). Initially, the idea of this treatment method was subjected to severe criticism, and ultimately rejected, thus it was used only in traumatology. But when a few years later Ilizarov became the head of the surgical ward in the Kurgan hospital and his work began to be a matter of interest, this innovative treatment technique was appreciated and its use was initiated in reconstructive surgery and orthopaedics on a wider scale.

The Ilizarov apparatus is a medical device that is used to merge the bone (broken or cut). Rods (Kirschner wires, Schanz screws) are fixed to the bone to stabilise the bone fractions. On the outside the rods are connected with rings (sometimes half rings), which in turn are connected to each other with telescopic wires. Stabilisers of this type are known as distractors.

The apparatus has a spatial structure (tripartite – made of half rings or rings). It is mainly used for complex deformities due to the possibility of adapting the fixator to any deformation of the body and rebuilding or developing in any way at any time during treatment. Its disadvantage is that it is less comfortable than a single-level apparatus (frames and braces, e.g. Orthofix). Over the years, attempts were made to combine the stability and multi-tasking features of the spatial apparatus with the simplicity of these single-level stabilisers, hence the development of the so-called hybrid structures.

The Ilizarov apparatus is being constantly modernised. It is now the most commonly used technique of limb lengthening.

Attaching the apparatus is just the beginning. The rest of the treatment largely involves rehabilitation, thanks to which the patient can maintain good physical fitness, which leads to full use of the limb. After the surgery (approx. 7 days) begins the first stage of treatment, i.e. slow stretching of the bone by increasing the space between two rings.

The most common Ilizarov treatment regimen is bone distraction of 1 mm per day – which gives 0.25 mm every 6 h. With this solution we use the regenerative abilities of tissue to the maximum extent without damaging the nerves, muscles, blood vessels and joints. This is the main, but also the hardest and least pleasant stage of treatment, because it reveals many problems associated with tissue tension. The duration of this period depends on the type of dysfunction and the rate of bone lengthening or shifting, which increases with the length of the treatment. The regenerate tissue reconstruction process begins after the completion of the distraction process.

It involves wearing the apparatus while maintaining the function of the limb. It is usually several times longer than the stretching period and it completely depends on the ability of the body to heal. Therefore, in the case of children, this period is shorter, as the body of a child has the ability to regenerate faster.

After removing the apparatus the patient begins rehabilitation of the limb to improve his/her mobility. This is when the final reconstruction of the regenerate takes place.

Use of the apparatus

Hemimelia – a birth defect involving a unilateral or bilateral underdevelopment of the distal portion of the upper or lower limb. The defected bone can be shortened or completely undeveloped (aplasia). There are two types of hemimelia – transverse and longitudinal.

Transverse hemimelia is a congenital absence of a portion of a limb (as opposed to amelia, in which the entire limb is absent). It is clinically similar to a state after amputation (hence it is sometimes called “congenital amputation”). Longitudinal hemimelia is a partial absence of one of the components of a limb in the longitudinal axis (in phocomelia there is a complete lack of a portion of a limb). It is simply an underdevelopment and shortening of the bone building the limb.

The defect most commonly involves the following bones: